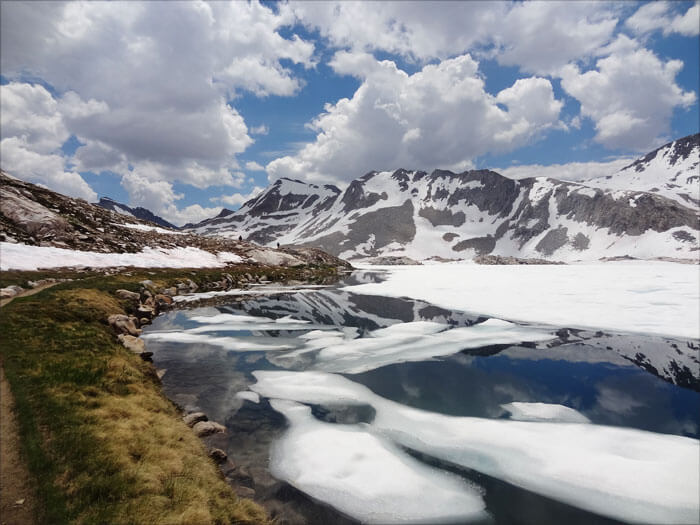 Is it dangerous to hike the trail?
In the Sierra Nevada, the trail can be cruel in many ways.  Hikers face rattlesnakes exposure, corneal flash burns from snow glare, and heatstroke.

Where do the Sierra start on the PCT?
Sierra section starts at Walker Pass (elev. 5,246’), the trail enters a road-less and wildly scenic realm, being met only occasionally by a dead-end road from the east. It hugs the relatively dry crest through the Chimney Peak Wilderness before reaching and crossing the South Fork of the Kern River near Kennedy Meadows South.

What is the highest point in the Sierra?
Forrester Pass. The PCT crosses eight named passes above 11,000’  including Mt. Whitney in the Sierra section, the first being Forester Pass (elev. 13,180’), the highest point on the entire trail. The route alternates between expansive meadows and conifer forests, then embarks on a 3,300’ ascent and traverse to Cottonwood Pass. In Sequoia National Park, the popular John Muir Trail descends from nearby Mt. Whitney (elev. 14,494’) to join the PCT. The trails share the same tread for most of the way to Highway 120 in Yosemite National Park’s lush Tuolumne Meadows (elev. 8,690’)

How long does it take to hike the trail?
If you do an average of 16-18 miles per day you can be done in a month or less depending on your fitness level, terrain, elevation, weather and pack weight.